“A WONDERFUL LISTENING EXPERIENCE.”  dom minasi (usa)
“a special open-mind spirit and a depth of horizons.” jazzconvention (it)

Pericopes is a jazz duo project that began in Italy in 2007 by pianist Alessandro Sgobbio and saxophonist Emiliano Vernizzi.

One would best describe their style as ‘New Jazz’, with roots in the European tradition, Afro-American music, and improvisation, and an affinity for melody and compositional structure.

In Paris, Pericopes began collaborating with New-York-based drummer Nick Wight, marking the inception of a “transatlantic” musical direction and performing more than 100 shows across the USA and Europe as « Pericopes +1 ».

Pericopes’s new album What What has been released under UNIT Records on January  2018. 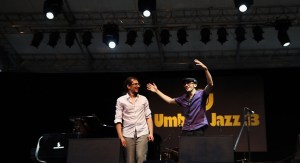 Emiliano vernizzi from 2000, Vernizzi has been invited to festivals in Italy, Europe and USA, and has been actively involved in several original projects: including European modern jazz, hiphop, jazz -prog, nu-jazz, and avant-garde. He has authored more than thirty recordings as a performer. Also in 2012, he was listed by Topjazz among the new talents of Italian jazz. In 2013 he won the first prize of Umbria Jazz contest 2013 with jazz project called “Pericopes”. He has attended seminars by John Taylor, Gideon Levensohn , Steve Coleman, Graham Collier; and obtained his M.S. in jazz music (cum laude). He played and made several recording with the « Civica jazz band of Milano », who has invited prestigious guests such as Eddie Daniels, David Raksin, D. Liebman, M. Roach, Bobby Watson, David Murray, Evan Parker, Paolo Fresu, Enrico Rava, among many others. Some of Emiliano’s international collaborators are: Bobby Durham, Paul Jeffrey, Steve Grossman, Tommy Campbell. For many years he has been member of the sestet of G.Cazzola. Since 2011 he plays in an American band led by Izzy Zaidman, recording three cds and participating in several tours across the U.S., and in Europe. He is currently professor of jazz saxophone at the Conservatory of Music « A. Boito » (Parma, italy).

alessandro sgobbio has been mentioned in the young-new-jazz-talents list by the Italian jazz magazine « Musica Jazz ». 2nd prize at “Luca Flores » piano solo competition, he has been selected for the famous “Concours Martial Solal – piano solo competition” in Paris, France. Sgobbio graduated from Conservatory of music in Parma (italy), studying with Roberto Bonati, Alberto Tacchini, Carlo Morena, Giorgio Tosi. He holds a masters cum laude in Literature and Philosophy. Master classes with Misha Alperin and John Taylor. between 2005 and 2015 he is an official demonstrator for yamaha pianos. In 2010 he released his first piano solo recording. In 2012 he recorded and played in Istanbul (turkey) with Taksim trio. In 2013 he created his new Paris-based trio, “CHARM”. With this trio, in 2014 he opens the « Italian jazz week » at the famous Sunside jazz club in Paris. As an artistic director and composer, he has worked also with Italian song-writer Francesco Camattini (four album-recordings) and in several theatre spectacles in Italy (Federica Bognetti, Roberto Cavosi), France (Emma Lancien) and also London (Don Giovanni). His music has been programmed at Radio France, RAI Radiotre (Italy), RSI (National Swiss television), Gilles Peterson’s BBC Music 6.